Until quite recently, restaurants were used to the long summer stretch being a time where black truffles are off the menu. The closing of European winter truffle season leaves quite a hole in the kitchen and the loss of such a powerful ingredient can at times feel like a handicap.

However, when it’s British summertime, Australia falls into winter, a seasonal handover that was taken advantage of back in the 1980’s. Around this time Perigord black truffle spores were taken to the southern hemisphere and towards the late 1990’s began showing signs of success.

The former British colony is now the fourth largest producer of black truffles after France, Italy and Spain. This has led to some inspiring culinary tours in Australia as well as their wider use in Australian kitchens.

But it’s not just Australians who are happy about the successful introduction of this famous tuber. Australian truffles have the ability to plug the summer hole for the entire northern hemisphere. This includes North America, Europe and Japan – all very valuable markets. 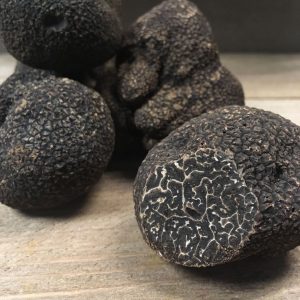 Awareness around Aussie truffles is certainly picking up momentum, not least because they pose some interesting propositions in the kitchen during the summer months. Intensely aromatic with superb depth of flavour, it really is no wonder that demand for this wonderful ingredient has grown exponentially over recent years. Still a miraculous gift shaved over pasta dishes, or slipped under the skin of a chicken, partnering Australian black truffles with seasonal summer ingredients can lead to some game changing results.

Of course black truffle marries perfectly with honey, and when you lace a batch with the deep lofted flavours of the truffle, it can be used to add serious intrigue to glazes on vegetables and meat. Contrasting the heavy notes of truffle with the freshness of peas and garden mint can create unique juxtaposition on the palate, while fresh water fish like trout and salmon also offer some exciting matches to truffle.

Truffled eggs and smoked salmon are no longer relegated to the depth of winter and can now grace the menu year round. This thrifty way to achieve maximum flavour using only a little truffle is a great way to flex your culinary prowess, and in many cases you can use the old trick of storing your Aussie black truffle with your eggs, meaning you get truffled eggs without having to give up any of the deep flavoured tuber.

Of course, cheeses are the obvious bedfellow of black truffle and with the influx of spring and summer milk cheeses, you have a great advantage to bring those cheeses on in your kitchen. A slither tucked underneath the rind of a ripe Brie De Meaux, or anointing fresh goats cheese is a way of making your Australian truffles really work for you across the cheeseboard.

With the winning combination of being the only winter truffle available during the European summer season, as well as being robustly flavoured, Australian truffles have become extremely sought after and fill one mighty gap in the kitchen.

Part of the Fresh Direct Group